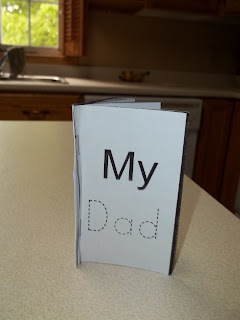 I was standing in the doorway of the Kidzworld games room on Father’s Day Sunday morning. I was volunteering in the Children’s Ministry that my wife Linda directs. The kids sometimes call me Mr. Linda (I actually told them to call me that). I had just finished handing out the “Crazy Cash” for the wild mob to go and spend at the store located at the far end of the games room. Standing there in my V.I.P. T-Shirt (Very Important Panda)… The theme for our upcoming Kidz Camp is “Pandamania”… not looking very tough… when one of the boys walked up to me and delivered an incredible Father’s Day present. While the other kids were playing he had created the “My Dad” book in the pictures above.
He is a young boy, 7 or 8 years old. A wonderful woman from our church adopted him and his sister sometime in the past few years. He looked straight at me and said, “I don’t have a dad, so I wanted to give this to you!” I was speechless as I received the small handmade book from him. All I could do was to ask him if I could give him a hug and he accepted. So, I wrapped my arms around him for a few seconds and then he was off to play.
You can see that the dad in his picture is frowning. On the next page which you can’t see, it reads “My Dad is” and then there is a blank where the boy had filled in “my friend”. My prayer is that the Lord will use me in his life as a “Jesus following” man who is a true friend to him so that his thoughts of what a father is will change to happy ones and will stir up feelings of gratitude because the Christian men in his life have stepped in to fill the “dad” gap in his life!
I know that God sent him to me as a wake up call. In that little exchange was an invitation from The Father asking if I would join Him in being a father to the fatherless. I have tucked his simple little book in my prayer journal to remember to keep him on my heart before God and I don’t think I will ever forget this Father’s Day gift. 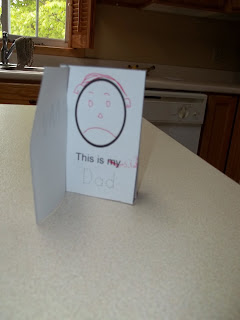